For the past two weeks we have been lucky to have the extraordinarily talented, beautiful Girlfriend3 sharing our home. Yeah, we let Son3 come here too, but he is not quite as pretty as she is.  Since she is from the world, Swedish descent, but lived in Switzerland before landing last year in New York, we felt it was our job to expose her to as much Southern Culture (Redneckism) as possible. At the same time we were filling her head with colloquialisms like "I'm fixin to carry Mom to The Pig" (loose translation: In a few minutes I am going to drive to Mom's, pick her up and drive her to the grocery store) we were also filling her stomach with southern foods. 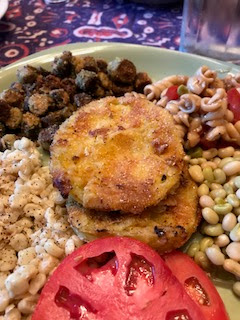 What would be more appropriate for a traditional meal than peas, okra, creamed corn, sliced tomatoes and fried green tomatoes? Except I really no longer fry okra or green tomatoes, so I thought I would share with you an easier and slightly healthier (very slightly) method to oven bake crispy coated green tomatoes.

This is not a recipe as much as it is a method, since the amounts will change based on how many tomatoes you choose to "fry".  First preheat your oven to 350. Spray a baking sheet with raised edge twice with Pam and set aside. Slice nice firm green tomatoes about 1/4 inch thick. Get 3 shallow bowls, one with plain flour, one with a beaten egg, and the third with a mixture (half and half) of corn flour and corn meal. Dredge the tomato slices through the flour, until all are coated. Then dip them in the beaten egg on both sides and dredge in the corn meal/corn flour mixture. Place on the baking sheet and continue until all the slices are coated. Spray the tops of the tomatoes twice with pam and pop them in the oven for 10 minutes. Take them out, spray twice again, then flip each tomato over. Spray the flipped tomatoes once and pop them back in the oven to continue cooking. (My oven took about 8 more minutes) Remove and lightly salt before removing from tray.  Serve piping hot for some down home Alabama goodness.

p.s. You can  "fry your okra in the oven too, just cut it and let it sit for a couple of minutes, coat it with meal and put it in a single layer on an oiled baking sheet that has been heated in the oven for about 3 minutes. (I use olive oil) Then spray the tops of the okra slices about 3 times with Pam. Flip it after about 10 minutes. Spray the flipped sides about 3 times with Pam and continue baking until it is brown and crunchy (About 10 minutes in my oven)

p.p.s She loved the okra but was not crazy about the tomatoes. I just think it was great that she would try things without flinching! They have only been gone an hour and I already miss them!
Posted by Anne in the kitchen at 9:52 PM