Are any of you old enough to remember Rocky and Bullwinkle? At the end of the episode they had an announcement telling all the kiddies to come back and see the next episode. The narrator would entice us to watch "Avalanche is Better than None or Snows your Old Man" It was always one title followed by an or with another title. (The avalanche thing is actually one of the narrations from a real Rocky and Bullwinkle episode)  If I were following the same pattern here I would name this post "Almost Sweet and Sour Chicken or Why You Shouldn't Menu Plan Right Before Cleaning the Refrigerator", but if I named it that it would just be too long of a title. So I did it here in the body of text instead.

Shortly after posting the Monday blog I decided I needed to clean the refrigerator and found several things that had no shelf life beyond dinner.  As much as I tried I could not get 1 1/2 boneless chicken breasts cooked in a vinegar based bbq sauce, 1/2 head of cauliflower, 1/2 of a red pepper, a few chunks of pineapple, the bottom of a jar of General Tso's sauce, about a cup and a quarter of cooked rice, and a slightly old piece of an onion to form into anything remotely resembling my menu plan. Instead I did as I said I would and use the menu as a possibility and nothing there was possible to transform. 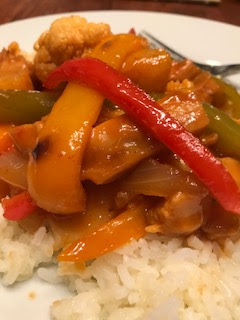 Punt time! I chopped the chicken into chunks and set it aside Then I cut off the mushy edge of the red pepper  and cut the remainder into strips, julienned the onion, cut the cauliflower into florets, cut a hunk out of both an orange and a green pepper and cut that into strips, minced a clove of garlic, and sautéed everything in a pan coated with olive oil until it was wilted. Next the General Tso sauce went in followed by about a tablespoon of ketchup, a dash or 3 of hot sauce, and the juice that surrounded the pineapple chunks. When I added the chicken and pineapple chucks everything was stirred together well, and I did add about 1/2 cup of the bbq sauce that the chicken was in because it seemed a little thick. (remember this was a thin sauce). I tasted it and found it lacking just a bit so I threw some powdered ginger in the pan and gave it a quick stir. The really thin bbq sauce left it a little too watery so I made a slurry of a couple of tablespoons of water with about 1/2 teaspoon of cornstarch and popped it in the pan to tighten every thing up. All that needed to be done was to nuke the rice.  The chicken was served over the rice and we had what might fondly be called a salvaged meal.

And now I have learned my lesson and will clean the fridge either Sunday night of early Monday morning so any leftovers can be rescued and incorporated into the weeks menu, maybe. Or I might forget about this entirely and start next week having to adjust again to keep from tossing nearly dead leftovers.

And this is just for kicks and giggles

Posted by Anne in the kitchen at 8:53 AM