Wow, That Was a Week

Monday: I have no idea what happened on Monday, except for going to a local farmers market. I had planned to load up on delicious foods, but very few of their items looked very good. I wonder if the early birds only get the leftover veggies from Saturday. I left with a bag of peas, some squash and some tomatoes. Even the cucumbers looked old and wrinkled. I made a mental note to go to a larger farmers market next time.
Squash casserole, coleslaw, sliced tomatoes, cucumbers, cornbread (or not)

Tuesday: TheHub did have a business dinner and I had planned to fast all day, but about 7:30 I was getting hungry and decided to eat. I just pulled a hodgepodge of leftovers out of the fridge
Gathering of remnants

Wednesday: Other than routine laundry, household things and swimming a lot more than I have been, it was a pretty uneventful day! Hooray. All that swimming made me want to eat a pretty healthy dinner
Chopped salad topped with frozen pulled pork

Thursday: Mom had to have a little oral surgery and I am her official taker to all things health and dental related. After waiting for an eternity (OK it just seemed like an eternity, but 5 hours sitting with Mom who either can't or won't do what you tell her to do per Dr.'s orders t does seem like an eternity) Anyhow, I got home later and had nothing made for dinner. I was planning on having the grilled pimento cheese sandwich one night over the weekend, but desperate times and all that!
Grilled pimento cheese sandwiches (thank you new waffle fake keto bread) , pickle slices, coleslaw

Friday: Mom had an eye procedure done butt early in the morning and it leaves her unable to function for about 8-10 hours later. I had her caregiver arrive about 45 minutes after we returned, then when she left  my sister took over until about 5. I went down to take the last shift was finally able to leave her alone at about 7. Normally she is fine by about 4, but she was having a rougher time than normal this month and I had not planned on having to be there later. Consequently I had nothing started for dinner. We decided a local meat and 3 was calling us.
Out to eat veggie plate

Saturday: This was a wild ride of a day. Mom thought she was in the hospital all day, but thought the hospital had copied her home so she would feel comfortable there. My sister and I took turns staying with Mom. She would be fine, fall asleep and we would leave only to get a panic filled phone call when she woke. Fortunately I live 2 minutes from her house.  I did run home and cook and eat while she slept, before going back to spend the night with her, but it meant a terribly quick dinner had to be prepared.
Grilled chicken with an orange ginger glaze, tossed salad

Sunday: I woke (after sleeping very little at Mom's since I got up to check on her about every hour) swapped duty with my sister, went home and got ready for church. We had just walked in the door afterward when got a call from my sister that Mom was doing much better, knew where she was and had come to her senses again, so she left and Mom took a nap. When she woke she was in a full blown psychotic state and was positive we had moved her to a facility while she was sleeping. I ran down there and stayed with her until she went back to sleep. Ran home and threw a load of clothes in the washer, did a couple of other chores then waited for the inevitable phone call. It came and as much as I tried to assure her she was at her house, it did not register with her.  Son2 and DIL2 went to her house and she complained to them about me lying and trying to convince her the place she was in was her house. After they left I went to her house, made her get in my car under the ruse that my sister was upset we had not met her new dog. We went to Sis's house, met Riley, the dog, filled up my car with gas, and I drove Mom down streets that were familiar to her. We talked about people she had known who lived in various houses and when we got to her house she knew exactly where she was. It was like the car trip had pushed a reset button in her little noggin. Except__she did want to know who had moved her furniture from the facility so quickly. I lied and told her Son2 and DIL2 were magical and could do things easily. She was satisfied and glad to be back in her real house instead of the doppelgänger house she had been in before we left.  I stayed with her for about and hour afterward just to make sure she was functional and able to be left by herself.(For the record, she woke Monday morning clear headed and even remembered her confusions from the previous 3 days) I needed something really fast for dinner and did not give a fat rat's fanny what it was. I had ground chuck in the fridge so that was that.
Grilled hamburgers, lettuce, cheese, pickles, tomatoes, onions. And not another thing!

I am beginning this week with a little trepidation. Mom's neurologist died suddenly a couple of weeks ago, so I have spent the morning looking for someone new. We really need to get her seen pretty quickly but the nearest appointment I can find (after calling several) is early November?!? WTH!

And now on to meal planning, which may or may not happen. I do have a caretaker for Mom today and am using this time to cook a few things to have just in case all hell breaks loose again.

Also, if any of you are looking for a truly delicious low carb orange ginger glaze, I found this at Walmart. I think it was about 3.80 a bottle. It declares it is a marinade but I say otherwise. I put some boneless skinless chicken thighs on the grill, cooked them until time to turn them, then  flipped them then brushed some of the marinade on the cooked side. Waited until the chicken was almost through cooking, turned it again and brushed it on that side. I let it cook about a minute and a half (just enough for the marinade to "set" on the chicken) flipped it again and waited another minute and a half. I guess I used about 2 tablespoons of the sauce in total and it was some seriously delicious chicken. I am not affiliated with either the product or Walmart, it is just something I used and really did like. So did TheHub! 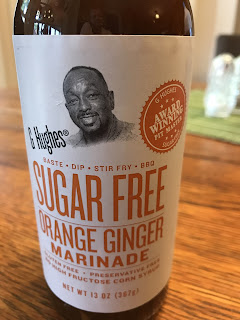