My Beloved Sister has said that when the end came our Dad went out swinging for the fences. She says Mom, on the other hand, is leaving in a cat fight. After last night we have amended her exit strategy. She is in a cat vs.ninja monkey bru ha ha. 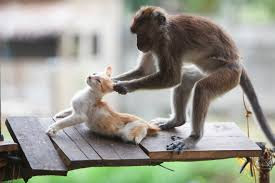 I have been going to her house every evening to be a constant in the transition from night to overnight care givers. ( This is in addition to being there from 7-11 every morning and running by at about 4 each afternoon)
Last night Mom decided she no longer wanted overnight care and if I could not stay with her every night she would just stay by herself. When I told her she had no choice,  that My Beloved Sister and I had hired overnight care, the woman who has not been able to get out of bed alone much less walk without a walker yelled "The Hell I don't" jumped up out of the chair she was sitting in, ran through the front door and was out on the porch before the care giver and I could catch her. She was holding on to the stair railing trying to make her escape and it took both of us to get her back in the house. Who would have ever thought a tiny little 95 pound woman could have so much physical fight in her.

It turns out in her diminished mental capacity she had decided we are trying to control her (somewhat true, if by control you mean keep her safe) and  we were giving her no input into her own care (also somewhat true, if you mean we talk about it with her before making plans, which she promptly forgets, and every day is the new to her first time she has had care) She also thought her night time care giver, who is an adorable very small woman, was a 12 year old girl, and she was not going to stay with a child.

And now we know a new plan. Every time anyone enters the house, the dead bolts much be locked to slow down her escape routes, because this is really difficult!

And as a small aside, she has no idea why her back is hurting so much more today. Think it might be from trying to escape from our grasps by pulling and twisting with all her might?

Posted by Anne in the kitchen at 6:06 PM