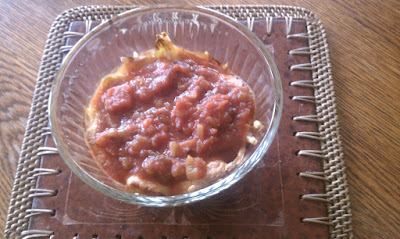 I was looking at my food challenge and realized I had yet to post anything for 2 of the challenges I gave myself, and started looking quickly for both a vegetarian entree and a crock pot item. Yikes! I needed 2 meal items for the same day. So it just made sense to begin at the beginning.

Vegetarian is pretty easy to do in the morning for me since I do not like breakfast foods. Well that is not the honest truth, I don't like food in my mouth in the morning. It takes at least 2 cups of strong black coffee for me to even think about eating anything and then who wants to eat eggs mid day? Certainly not me, or at least not traditional eggs and bacon with a side of toast. Today was no exception and I hunted for some savory vegetarian meal that would accommodate my need for flavor but would be something anyone could do easily and would not be limited to breakfast. I settled on a chile relleno casserole. I love peppers and keep canned chiles on hand all the time. If you love this dish featured in nearly every Mexican restaurant and think this will be a replica of it you might want to rethink making this. Though the ingredients are the same it is put together so differently that one is the yin to the others yang. A traditional relleno is a cheese stuffed chile that is deep fried and then baked with cheese on top of it. This version is a chile with an egg white batter over it that bakes light and fluffy, similar to a souffle. This recipe assumes the vegetarian is lacto/ovo ( uses dairy and eggs)

Preheat oven to 350.
Spray a deep 1 1/2 quart casserole dish with cooking spray
Beat evaporated milk and cornstarch until smooth.
With an electric mixer beat the egg whites until soft peaks form.
Split open chilies, rinse to remove seeds, then drain on a paper towel.
Fold the egg whites into the milk mixture
Mix cheeses together and reserve half the mixture for topping.
Alternate layers of chilies, cheese and egg mixture in casserole dish.
Bake for about 30 minutes
Mix both tomato sauces together and pour over the top r, then sprinkle the reserve cheese over the top.
Bake for 1/2 hour more or until done in the center (the egg white mixture should not be runny)

What I did differently. Since it was just me for a late breakfast, I used 1/4 cup milk and 1 1/4 teaspoon of cornstarch and 1 egg white. I love peppers so I used the entire can of chiles and I used just 1 tablespoon of cheddar jack shredded cheese. Also since it was just me I punted on the tomato sauce and added a couple of tablespoons of salsa that was living in the fridge. I really did not want to have leftover tomato sauces. I have a very small pyrex bowl that I baked it in and it was slightly larger than the ingredients. Everything puffed and rose well, staying within the confines of the bowl

The verdict: this is a very delicious unusual breakfast food. I loved it but as I said earlier, I am just not a big fan of "normal" breakfast food. This would be outstanding as a brunch menu item but would also be a very good lunch or dinner entree. Served with a large salad and some tortilla chips and salsa it would be a complete meal.


Of course since I am the queen of procrastination I still had a crock pot meal to make. I had actually taken a slab of baby back ribs out of the freezer yesterday afternoon and they had thawed in the refrigerator overnight. ( Whew! Saved me from having to run to The Pig to get something to throw in the crockpot this morning) It made the decision of what kind of crock pot recipe to look for easy enough. The only problem was most were "just put ribs in and toss on some barbecue sauce" I am not sure about you but that is not a recipe. It is just a way to cook the ribs and sauce. I wanted an honest to goodness recipe. Instead I wound up using some of one recipe and a little of another. Good grief this stuff was going to cook all day long. The least I could do was make the sauce from scratch and let it simmer all day too!


Remove the silver skin from the back side of the ribs and slice into sections of 2-3 ribs
If desired brown the ribs on a broiler ( a couple of minutes on each side)
Mix the liquid smoke with the barbecue sauce.
Line the bottom of the crockpot with the onion slices, carrots, apples, and potatoes.
Place a layer of ribs on top, meaty side up. Pour some of the sauce over the ribs and coat the surface with a brush or spoon Place another layer of ribs on top of the first layer, pour on more sauce, and spread.
Repeat until all the ribs are in the crock pot.
Pour the remaining sauce on top.
Resist the temptation to put the meat on the bottom of the crock pot. It will only overcook and turn to much
Cover and cook on low for 6 to 7 hours or on high for 3 to 4 hours.

I did not want red barbecue sauce in the ribs so I made a mustard bbq sauce instead. I also left out the liquid smoke because the flavor of the mustard did not require a smoky base

Mix all ingredients together and simmer over a low heat for 30 minutes.

I make this sauce all the time and never have put the butter in it. I have no die what it adds because we love it as is. When I am in a hurry i omit the lemon juice and cayenne and just add a squirt of Sriracha. This is not a great sauce for chicken but it is the bomb with any kind of pork. The recipe makes 2 cups of sauce and any leftover keeps well covered in the refrigerator. 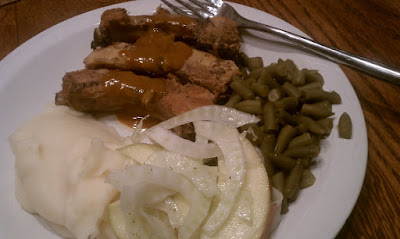 The ribs were tender and the sauce flavor permeated the meat. I cooked them on low for 8 hours and the meat literally fell off the bone when you stuck a fork in them. I am not sure what I was supposed to do with the bed of vegetables on the bottom of the crackpot. They fairly disintegrated when the spoon touched them. The sauce had thinned substantially while cooking and I did not have time to heat it and reduce it. If I had an immersion blender I would have blended the vegetables to thicken the cooking sauce and I just did not want to get the blender out to puree them. Instead I spooned a couple of teaspoons of the leftover sauce on the ribs when I served them. I served them with green beans, mashed potatoes and a shaved fennel and apple salad. The entire meal was very tasty and everything complimented each other, yet I am not sure I will do it again. I like ribs much better when the slow cook on the grill and you get that tiny bit of char on the edges with smoked tender meat. it has nothing to do with this recipe, just a partiality about how ribs should be cooked and eaten. I might try this again using a chop or some other cut of pork.