A Souped Up Sweet Superfood 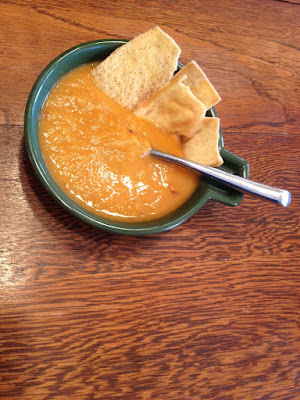 First let me tell you...I do not like sweet potatoes. I can and will eat them but they are never at the top of my food choice list, which is pretty bad since they are in the super food category. Recently I was eating at I Cantina and tried the sweet potato soup. I was surprised at how good it tasted, and decided to try and find a recipe I could make at home. The only thing I really wanted to change was to have the soup a little more savory and a bit less sweet. Searching through various websites led me to this version. Rather than the cinnamon and nutmeg flavors found in the I Cantina soup this one has a cumin base.

Since it was really cold yesterday and The Hub was a little under the weather it was the prefect time to try it. From start to finish it took a total of 30 minutes until we had steaming soup in our bowls.


sour cream, for serving (I had none so we skipped it, but it might have lessened the heat of the extra chili)


In a large Dutch oven or heavy pot, heat 1 tablespoon oil over medium high heat. Add onion, season with salt and pepper, and cook until beginning to brown around the edges, about 7 mins. Add cumin & garlic and cook, stirring continually about 1 min. Stir in sweet potatoes, chile, and broth. Bring to a boil, reduce heat and simmer until sweet potatoes can be mashed easily with a spoon, 20 to 25 mins.

Let soup cool slightly. Puree the soup. I don't have an immersion blender, so it had to be pureed in the blender in 2 batches. It would have been much easier to just use and immersion blender and puree it right in the cooking pot ( Adding immersion blender to the shopping list) Season with salt & pepper and serve. Top with sour cream or serve with tortilla chips . I had no tortilla chips so I used pita chips instead. They were perfectly fine.

This soup was so good. In fact the only changes next time will be 1 chipotle rather than 2 and about a cup more broth to thin it down a little more. I froze the leftover soup in individual serving sizes and am looking forward to several delicious lunches. This will become a staple in my homemade soup rotation.