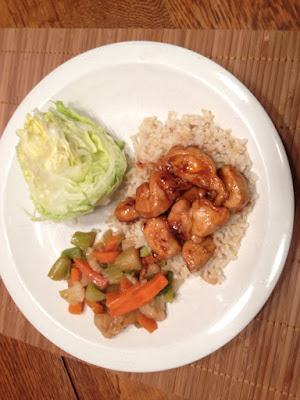 If you are in a food court of a mall, and it doesn't matter what mall or what city, you are apt to be chased by a dude or dudette following you waving a small piece of chick on a toothpick yelling "Try this sample?" It is usually called bourbon chicken but I have seen it across the country with varied names. Since it is a favorite of Son3 we have bought it in multi locations and it is always the same, a piece of cubed chicken thigh with a sweet spicy sauce.

Late this afternoon as the ballgame was getting close to ending, The Hub suggested we eat supper in between games. That was fine but it would have been nice to know with a little more than 7 minutes to go in the fourth quarter. There is this notion shared by those whose cooking skills are limited to oatmeal, grits, and cheese toast, that supper mysteriously can be prepped and finished in about ten minutes. As the rest of us know this is just not necessarily so. I can slap a meal on the table quickly, but it is always something I have planned to do well in advance. Tonight I had boneless chicken breasts in the fridge that really needed to be cooked tonight so now I had about a 10-15 minute window to plan and execute a meal.

A few days ago I had been browsing recipes and had bookmarked one for bourbon chicken on one of the copy cat recipe sites. I knew I had some brown Minute Rice in the pantry and I had a bag of mixed vegetables in the veggie drawer and a head of clean iceberg. ( Now I know why I washed it before I put it in the crisper. ) I put the rice and water on to boil, got a pan with olive oil heating, and got the chopping board out to do a quick hatchet job on the breasts. About 1 minute later I had odd shaped "cubes" ready to toss in the skillet. It took about 5 minutes to get the chicken pieces cooked, with Son 3 reading the sauce recipe to me so I could quickly add ingredients without having to stop what I was doing. I very quickly put the veggies in a pan in the microwave with a tablespoon of water and a tablespoon of Teriyaki sauce and pushed 4 minutes to nuke them. The sauce for the chicken was cooking so I threw the chicken back in the pan to coat it and also for the sauce to thicken a little. It was a whirlwind but I managed to get it all on the table in about 11 minutes, so they could scarf it down in another 15 minutes and be ready for important things like football.


I mainly cooked this as it said with one exception.
If you look at the picture you will notice this looks lighter and reddish instead of the deep reddish brown the mall guys serve. It seems whoever was telling me what the ingredients were forgot to mention the soy sauce, so that was not in ours. I imagine that is why it tasted close but not exactly like the chicken the guy chases you with. I noticed after about 10 minutes the sauce was very thick . I understand since there was 1/3 cup less liquid than the recipe called for! It was still tasty and I will do it again. In fact, the next time The Pig has boneless breasts on sale I am going to get several packs and cube enough for 2 recipes and package them in 2 containers for freezing. I always have all of these ingredients on hand and I always have brown Minute Rice in the pantry, so this might become my go to emergency quick meal.

Have fun and go whichever team is currently playing! ( I have no idea)

Happy eating!
Posted by Anne in the kitchen at 4:10 PM