As I have said on previous Mondays, in order to keep my mind set in a good place, I end each day thinking about the best thing or things that happened that day. For me it is so much better to dwell on life's positives instead of wallowing in aggravation, despair, angst, self pity (name your poison here) , yadda, yadda, yadda. This does not mean every day is perfect.  In fact, most of my days are far from perfect, but I am choosing to revel in those moments that create a sense of calm, excitement, or wonder.

Monday: Got to spend the entire day at home alone.  Occasionally I love a day like this to recharge my batteries, and get things organized without interrupted time.

Tuesday: The mornings are glorious now, the pollen is all but gone, and I was able to have a couple of cups of coffee on the deck just listening to the birds. 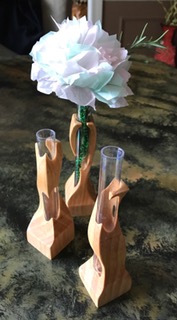 Wednesday: TheHub had a dinner meeting so I grabbed a chicken meal from Bojangles, ate in front of the TV and caught up on several shows I had DVR'd.  I love being able to watch an hour long show by zipping through and taking only about 15 minutes to follow the plot line. (And yes, I understand I am missing some of the intricacies of the story but I am not deeply enough invested to care abut anything but the major story line. I will never do to a show I really like. Can you say "Game of Thrones")

Thursday:  Morning coffee on the deck with birds singing  was really nice but the best thing about the day was Son2.  He has been working at Mom's house in my dad's old workshop making these really cool vases for the participants at Independence Place to give their Moms on Mother's Day. He and his gal pal hung around a little after and ate dinner with Mom which met her social needs, plus she eats much better when someone else is there.  And can you guess what happens when she eats food? She actually feels better and has more energy. Imagine that! So special thanks to you two. You made my night so much easier.

Friday: Got the car cleaned out, loaded Mom's lawnmower in the car (It is in her way since she has never cut the lawn in her life and started using a lawn service after Dad's death. But everything is in her way now and everything must be taken care of. Right.  This.  Minute. After taking care of the intrusive lawnmower, we headed to the lake place. We got there is enough time to wash the pollen off the porch so we could sit out there and enjoy the sunset. Nirvana!

Saturday: A/c at the lake place is on the fritz.  Bummer and it was kind of hot, but we have a big screened porch plus one of those magnetic screens on the house door to the porch so we were able to leave the bugs outside, the door open  and the fans on so the air at least moved. Late at night the storms came and the temps dropped quite a bit, enough that we actually had to sleep with a sheet and light cotton blanket covering us.  Sleep perfection, breezy stormy night with occasional owl hoots.

Sunday: Home again, home again, jiggety jig. We had plans to be at church Sunday evening to pack food for a world hunger mission. In 2 hours about 150 volunteers packed, sealed and boxed 50,000 meals. The church will be doing this for a couple of more days so I will probably volunteer at least once more because I truly do believe it is a blessing to be a blessing.

And apparently when I called Mom and she didn't answer when we got home from the lake, dressed and went on our little service mission then went out to eat I caused her severe angst which impacted My Beloved Sister.  It seems that by 3 pm Mom had decided I was in a wreck and dead on one of the little country roads between here and the lake. Don't ask me why.  By 7 pm she wanted my sister to drive her to the closest emergency room we would pass driving home from the lake.  My beloved sister had tried to call our cells which we had turned off during the meal packing (per request) and neither TheHub or I had turned our ringers back on  when we were at the restaurant. By shortly after nine when I finally called her she was in near hysterics and it was all my fault.  I would feel guilty but her crisis level was exactly the same when her refrigerator alarm beeped last week indicating her water filter needed to be changed, or when she got a piece of junk mail fishing for her to renew her car warranty.
Posted by Anne in the kitchen at 8:07 AM