Meals here become boring and rather routine, so occasionally I try something we have never had before. Sometimes it works and is worth repeating and sometimes it is a one and done event, with a promise that is will never happen again. The German pork roast we tried last night is one of those things we will have again and again. The flavor profile was really nice and different from what we eat most of the time. This is not a recipe but more of a how to. I figure you are all smart and can figure the amounts you need by yourself based on the size of your roast. 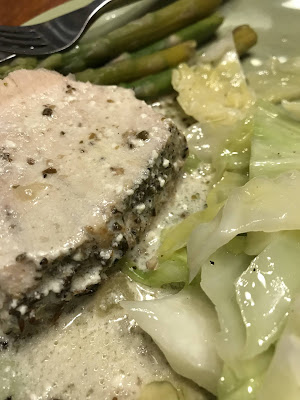 Rub the roast with olive oil. Sprinkle with salt and pepper then cover the top and bottom with marjoram followed by caraway seed. Put oil in a hot pan and sear the top and bottom of the roast. Place in a slow cooker on low. Cook for about 2 hours then add about a half cup of water and a tablespoon or 2 of vinegar (for a smaller roast use 1, larger roast use 2). Continue to cook for about 5 more house.  I took about 1 cup of the cooking liquid, added about 1/4 cup sour cream and a tablespoon of arrowroot, then cooked it over a low heat to make a gravy. This was a really unnecessary step and would have been just as good with some of the pan juices over the pork.  I sliced it last night and poured the gravy over it, but after we had eaten it I shredded the remaining for leftovers. The pork loin I cooked was quite large and well will get a minimum of 4 meals from it.
Right now 2 packs are in the freezer for desperation dinners when time is short, and one container is in the fridge for later in the week.

Both TheHub and I thought this was extremely tasty and well worth making again. I am not sure what I would do differently, possibly add some whole grain mustard to the cooking liquid mainly for color. Even without it, the taste was spot on. Give it a whirl, it's worth the little effort it took to make something so good.