I know we are rushing fall, but our temps have been so horrid lately that this cool down, even if it is temporary, feels so good and makes me want fall things. Like soup, who doesn't like a nice soup during fall or the winter.

Truthfully I could eat soup year round, but TheHub has a different stance about when soup should legally be consumed. Our highs today were in the upper 60's. Yes I know to some of you that does not feel cool, but it was cool enough to get the go ahead from the soup police. We had a big meal for the day at lunch. We went to the Brazilian festival and brought back so many delicious foods; black beans, pork and rice,  steak kabobs, tamales, empanadas, and 3 different types of desserts for a shared meal with Son2 and DIL2. It was a football day and what is more perfect than eating and talking about football (Except that the Georgia/South Carolina game went into overtime which put us eating right as the Alabama game started.)

I had made taco soup  on Friday for TheHub's post game meal, and figured I would just scour the fridge for leftovers for me. At halftime I was on the computer looking for some kind of easy keto dessert, when I found a recipe for pumpkin doughnuts using the pumpkin spice extract that came in the box with  my cornbread extract. It called for some pumpkin puree and I thought I might as well find some way to use the rest of the can. I remembered a recipe for sweet potato soup I have made before, so I thought I could use pumpkin instead and hope for the best. 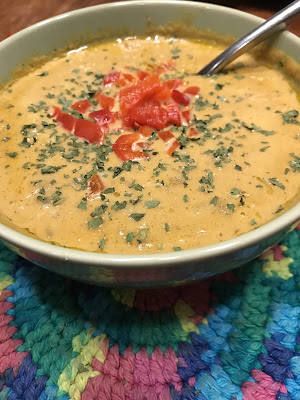 Wilt the onion and pepper in the bottom of a small soup pot. Add the cooked sausage and cook until the veggies are soft. Toss in the broth and pumpkin and stir until it is all combined. Add the seasonings and cook on low about 15 minutes (Add more broth or water if the liquid starts to reduce) About 2 minutes before serving add the heavy cream, stir through and bring to whatever soup temp you like. (It really did not lower the temperature much at all. I let it heat on low about a minute and a half, stirring the whole time)

This is a pretty unattractive soup so I would suggest sprinkling some minced red pepper and some chopped fresh parsley on top for a little color. Since it was just for me, I did not do that, but I will for the picture. When I tell you even though it is not a pretty food but the flavor makes up for it, I feel like the coed describing her not so pretty roommate to a potential blind date, "She's got a great personality and all the girls love her"

Trust me, the flavor did make up for the less than stellar appearance of the soup. I am not crazy bout the taste of pumpkin, but with this soup, I never felt I was eating eating pumpkin. The broth was a lovely blend of spices and none of them competed with the others. It was just a nice blend in a creamy base, with chunks of sausage, and bits of vegetables.

Fortunately I have enough left over for a meal during the week. It is supposed to be cool and rainy on Tuesday, so I think this might be a great meal for that night. Maybe with a piece of the mock cornbread and a salad!

*I always have 1 cup packs of sausage frozen. Sprouts has a couple of packages of their butcher made links reduced nearly every time I go shopping. They are at their last sell by date so I always buy them, bring the home and cook and freeze them. Usually it winds up in a pan full of cabbage for a super quick meal so I am not picky about labeling what type of sausage it is and I rarely know exactly what kind I am using. Judging by the taste this might have been polish flavored sausage.  I think just about anything other than Italian sausage would work very well with the flavors in this soup.