When I remember it is Tuesday I follow Annie @ Tuesday Four.  I always like the questions she asks.and they usually dredge up some memories from long ago. Hop over there n
and join in

Let's talk about your town this week!

1. Do you like your town? Is it a city, town ? Can you describe it for us?
I like where I live perfectly fine. I grew up here, went to school here and then, before my oldest started kindergarten, we moved here specifically for the schools. If anyone ever asks me, I tell them I live in Birmingham, which is true but not technically true.
The Birmingham Metro area has a population of about 1,100,000 but the actual city limits has only about 450,000 which means most people who claim they live in Birmingham legally don't.
It is a weird place with the city surrounded by other incorporated cities of various sizes. If you were using circles to illustrate with Birmingham being the center circle, then my small city would be in the 3rd circle in the southern portion of the circle.
I live in a self governed, suburban city (more like a town) of about 35,000 people. It has all the city services of any place (including its own police, fire dept, school system, library, rec center, etc.)  Most of the area is single family houses, though there are a few apartment complexes and some condos.
Like most suburban towns, nearly all of the arts and entertainment is found in Birmingham city proper. This is mainly just a residential city with nice homes and mostly manicured lawns. Because the schools are really good, there is a huge young population. When we downsize we will move to a different area. Our house is entirely too big for just the two of us, and we have no need of the school system (or high taxes that pay for said school)
2. Are there any special points of interest in your town? The only thing interesting in our small town are a couple of  old temples built back in the mind 1920's that were part of an estate built to recreate a temple to Vesta. The guy who built it had visited Greece and become enamored of the temple there. He built Temple Sybil to serve as his headstone because he wished to be buried in a cave on his estate. That turned out to be a no-go and his remains reside in a regular cemetery. He had no heirs to inherit his estate (Who wants a home where all the parties need to be toga themed anyway?) and the property was sold, mostly destroyed and a Baptist church was built there. One of the structures remains there and Temple Sybil  was relocated to a spot as you enter the city. It is owned by the city and is open as a small park with beautiful overlooks of the valley below. (Not afraid of losing money it can also be rented for small events. I understand it was a fairly popular wedding venue when things were locked down during the pandemic) 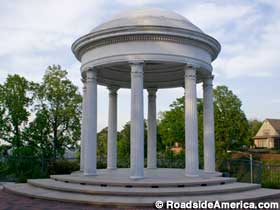 Birmingham (the city) has several spots that are interesting. The Civil Rights Museum is great, Vulcan is the largest iron statue in the world, there is a nice zoo, a Le Mans motor facility, and several other noteworthy places, but what everyone I have ever met finds the most memorable is the BBQ. 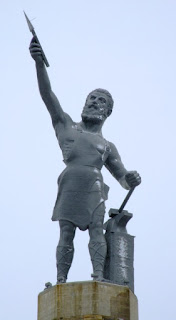 Speaking of Vulcan, he stands atop a structure dressed only in his apron. Before he was revamped, his bare behind was aimed directly at a neighboring suburban city which lead to a song that was briefly popular here called "Moon Over Homewood" 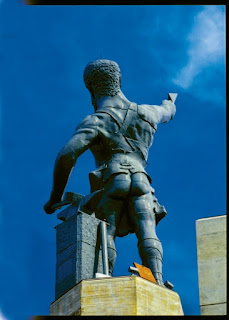 3. Does your town have parks, restaurants? There are several parks in my particular burb, but there are parks in all of them. My particular city has quite a few restaurants, some are great and some are just fine.
Birmingham itself has some fabulous restaurants, in fact Highland Bar and Grill won the James Beard award for best restaurant the last time they had the award ceremony. The pastry chef there also won the award for the nation's best pastry chef. Sadly they closed during covid and have not yet reopened, but they are set to reopen this spring. I would suggest for anyone visiting the Birmingham area to go there., The food is near perfect, the service is impeccable, the attention not detail is precise and the dining experience is wonderful. However__expect to drop some coins for said experience.
4. Do you think your town needs changes to make it better and if so what changes would you make? I think change is not a bad thing and everywhere could have improvements. My particular town is little more than a bedroom community. I am sure there are some changes that would make it better, but it is basically just a residential community.
Birmingham itself is changing. The downtown area had been steadily declining, but there has been a sharp upturn with the return of really good restaurants and entertainment venues which is changing the face of it, making it a central go-to destination.
The downside of Birmingham is the high crime rate. I am unsure how to make that better.
Posted by Anne in the kitchen at 8:49 AM