I have mentioned before I am currently doing the Keto diet. It has meant changing how I am eating while still preparing meals for the non-Keto people I cook for everyday. (TheHub) So far it has been pretty easy because he loves rice, or a baked potato, or pasta in any shape or form, and I can add any of those with minimal prep. Also he is perfectly happy to eat whatever protein and vegetable I am eating. Shoot if I were him I would be happy too, I mean, how often do we have lobster (Thank you Sprouts for the super sale on lobster) or steak when I am not doing this?

The weekends are the hardest on me, because I am not eating breakfast, and he loves a big Saturday morning meal. Last weekend he mentioned pancakes, which are totally off the table for me. At least traditional pancakes are a no-go. Since we had waited so late in the morning (almost 11) I was fine with that because I could technically call it brunch, plus I really wanted to try something I had not been eating. (See note below about variety)

I was searching the internet for recipes to help with variety (it's the spice of life, you know)  on this eating plan and had copied and pasted a recipe for pancakes. The blogger claimed they were as tasty as the pancakes her family's restaurant served when she was growing up/working along side her folks. I thought I would give them a try, knowing the true test would be how well they were received by TheHub. 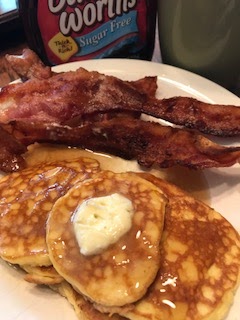 
In a large mixing bowl mix the egg yolks, cream, fake sweetener, and salt until smooth.

In a separate bowl beat the egg white until soft peaks. form  Gently fold the beaten whites into the batter. Gentle fold is the operative word here.

Melt butter in a large heated non-stick pan (I use a non stick griddle) over medium heat. Swirl or wipe the pan with a paper towel to make sure all the surface is coated. Spoon in the batter  on to the warmed pan to make your pancakes  slightly larger than silver dollar size. (I have a mini muffin scoop so I used that)

Cook for 3 minutes, or until lightly browned, and then flip each pancake and cook for another couple of minutes. Do not try to flip them too early or world chaos will follow! The recipe cautioned against turning them to quickly, but did I pay attention? Learn from my mistake.  Dish them up with butter and no sugar syrup or crushed berries or whatever your taste buds demand.

Friday we were out running some errands when he asked if I would make him pancakes like I did last week!  Pancake recipe, for the win!!! I made them for him this morning and he ate the entire recipe by himself. I can see this becoming a regular feature on the very occasional weekend brunch.

And just in case any of you think I am doing the June Cleaver, wake up to wait on my family thing, the answer is no.  Generally TheHub gets up on the weekends and makes a small pot of grits. He has very limited food prep skills,  grits, fried eggs and grilled cheese. (He is excellent with take-out though, and can procure food in a heartbeat.)  So on the rare occasion I plan to eat breakfast or the even rarer occasion he asks me to make him something special, I try to oblige. Well at least if I am in the mood to cook, or it doesn't take too long, or make too big of a mess, or I have already had a couple of cups of coffee, or all the stars are aligned, or. . .

p.s. As soon as I can find where I found this recipe I will post a link to that site.
Posted by Anne in the kitchen at 3:40 PM