Product Review, Where Have You Been All My Life

I am really proud of TheHub because he played along with me during my February pantry challenge and did no recreational shopping for the entire month. Today he only worked a half a day and when he got home one of the first things he wanted to do was go somewhere__anywhere was fine with him as long as we ended our trek at Publix.

First we ran by his barber so he could get a haircut. We took my car this time since his is in the shop and he has a loaner car. I had taken my iPad to sit in the car and read while he got  his "do" in order. One of us forgot our mask, so one of us had to run hame to grab a mask while the other one of us got a haircut wearing a peach floral mask. Oddly, it is not the first time one of us has used that peach floral mask in an emergency, but we can both continue on with our plans because one of us has several masks in their backpack which they had left at home today.
Long story short, one of our heads looks very nice now and one of us did not get to read a single word.
After the haircut, we drove to UPS to return a modem to AT&T. Hell will freeze over before I do business with them again. Let's just say it took about 6 hours of phone calls to rectify their over billing before we cancelled the service at the lake place. They are lucky I am not a lawyer, because if I were I would file a class action suit so quickly it would make their collective heads spin. I just have 3 words about their practices. Bait and Switch
Next we drove to Publix. When TheHub walked in it was like the heavens had opened for him and I am pretty sure he heard the angels welcoming him home. It had been so long since he stopped in that he had to ask the cashier and the bagger their names. They had both started at the beginning of the month and he had never seen them before.

I do not do this very often, but Publix had a BOGO deal on a product I had never tried before and I was very excited to be able to shop regularly again. I had already purchased everything I needed for my February pantry challenge and finished it spending only 2 bucks over my 60 dollar budget. Although it is still February, TheHub and I went to Publix today with the knowledge that anything we bought would be part of our March food budget.
Bless him because every time he came up to our buggy (southern for cart) with an item I sort of dashed his joy by telling him we really didn't need whatever it was. Finally he bought what he wanted all along; a multi pack of individual packaged chips and chocolate covered peanuts. Meanwhile I knew fennel bulbs were on sale and there were a couple of other items I could use (need? no way) and the BOGO item I had seen advertised that was yelling at me to buy.
I am in no way affiliated with Publix nor Pickle de Gallo.  I bought it, actually 2 since there were part of the BOGO ad.  Oh my goodness. This stuff is delicious. Imagine a crispy crunchy, slightly acidic, dill salsa. I just had a taste of it, but I am pretty sure I will plan meals where I can use it. Right now I am imagining pieces of sliced salami topped with this. If you are so inclined and you see it grab it and give it a try. If you hate it, that's ok too, just send it to me! 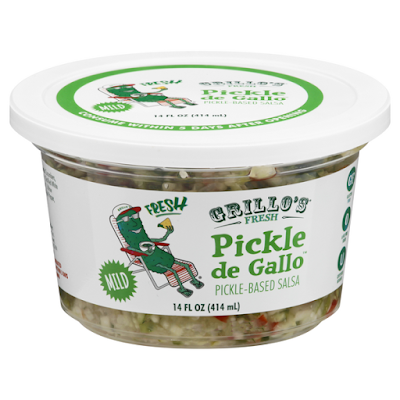 Posted by Anne in the kitchen at 9:08 PM