(This was written Friday morning, but I forgot to hit publish. Such is life)

OK I understand this is not really a recipe, but more of a concept but I am counting it nonetheless since we have never eaten it like this before. (If that is not a lame excuse for an opening sentence I don't know what is!)

Last night began March Madness and our team played (not well but at least they played) so TheHub wanted to have a basketball game meal. Generally when we have a game night meal it is something like hotdogs, but I was not in the mood for them. A few days ago I was flipping through some online recipes and I saw a recipe for sheet pan chicken nachos. I couldn't find it last night, but thought "Hey it's nachos." It's not like I needed a recipe to make them really so I winged it, which is a play on words since I sauced the chicken with buffalo wing sauce. 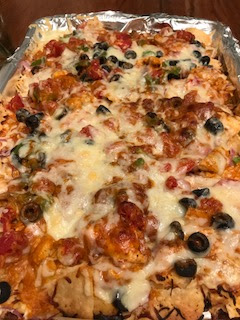 Here is a breakdown of how I made it. Take what works for you and change what doesn't. It's nachos and there are no rules.

1/2 bag leftover tortilla chips (enough to fill the bottom of a jelly roll pan)
1 boneless chicken breast and 1 boneless chicken thigh, poached and shredded.
Buffalo wing sauce (I used Moore's blue cheese buffalo wing sauce cause it was in the fridge)
1 can petite diced tomatoes, well drained (If tomatoes were in season I would have used fresh ones, but they are very hard and pithy here right now.)
2 jalapenos seeded, ribbed and diced, (Substitute bell peppers or omit entirely)
1 small can drained sliced black olives.
1/2 onion minced
1 8oz. pack of taco flavored cheese shreds
4 ounces (ish) grated white cheddar (it was what I had in the fridge)

Line a jelly roll pan (15 x 10 large baking sheet with sides) with aluminum foil. Put the tortilla chips all over the bottom of the pan. Put the shredded chicken in a bowl and toss with buffalo wing sauce. I used about 4 tablespoons, but had a lot left in the bowl after coating the chicken. Arrange the chicken somewhat evenly over the chips then sprinkle the tomatoes over the chicken. Add the jalapenos, olives and onions in that order over the tomatoes. Top with the cheeses and bake at 350 for about 15-20 minutes until the cheese is nice and melty and the veggies are softish. Serve piping hot with a side salad. We all thought it would have been better with a dollop of sour cream but we had none. Enjoy!

I wish I had used black beans and some frozen niblet corn, or better yet the Trader Joe's fire roasted frozen corn but I had none. Next time I will. This was really good and we all decided we wanted to have it again. I might even make it without chicken and just toss the onions in the buffalo sauce, or change the whole thing and use bbq sauce. I figure the sky and imagination are the only limits, so next time we will have sky high nachos. It is quick and easy and is going to replace the hot dog dinner before TV games.

The best thing about the whole baking pan concept is having just on pan to clean and since it is lined prior to cooking, the pan really just has to be rinsed well. Try it, you might like it!