When doing keto there are a lot of foods I miss. One is the starchy foods like rice or potatoes that tend to round out a meal. I have found decent substitutes for most things and though I am not a French fry connoisseur, I occasionally like them. When I saw this recipe for keto fries on the Youtube site Heavenly Fan I thought I might try it. Then I saw an updated version on KetoFocus YouTube channel. She had used the original recipe and done some experimenting to see if she could make them a little tastier. I am all about someone else experimenting for me

Heavenly Fan had two different recipes for making them and I will share both, since I tried both recipes. 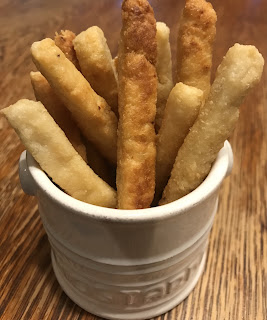 This photo has some of both recipes. You can't even tell which is which by the color since I cooked both recipes to different levels of doneness as a taste/feel comparison.
#1. 100 grams almond flour (about  1 1/8 cups)
3 teaspoons xanthan gum
6 tablespoons hot water
22 drops mashed potato flavoring*
1/3 teaspoon salt
Oil for frying **
Mix the almond flour and xanthan gum, Add the hot water then stir like crazy to mix everything well. When it is all mixed add 20 drops mashed potato flavoring and the salt. I found I had to mix it with my hands very well. Make a ball and let it rest in a covered bowl for about 15 minutes. I did not read the directions or watch the video so I let it rest about 7 minutes and it was fine.
Put the dough ball in the center of two sheets of parchment. mash it down in the most rectangular shape you can manage, then using a rolling pin roll it a little less than 1/4 inch thick.***  Once the dough was rolled out I used a pizza cutter to cut the dough in about 1/4 inch wide strips, which I then cut in half, just to make them look a little more like the fries I would have made from potatoes.
Heat a skillet with about 2/3 inch of oil. I used avocado oil because it has a pretty high smoking point (not necessary) Heat the oil somewhere between medium and low. It has to be low enough for the center to cook through, but high enough for the outside to crisp up.  Put just a few at a time in the pan and cook to a golden brown on the bottom.  I used small tongs to turn them very gently when it came time to flip them. After the flip you do not have to be as gentle with them. When they are nice and golden remove from the heat and drain on paper towels. Continue cooking until they are all done, enjoy.
#2. 50 grams coconut flour (about 1/2 cup)
3 teaspoons xanthan gum
7-8 tablespoons hot water
22 drops mashed potato flavoring
1/3 teaspoon cajun seasoning (I used Slap Your Mama)
The directions are the same as the almond flour one, except the dough does not roll quite as smooth and you will have a few ragged edges.
The verdict? I actually like the coconut one best, but I think it was because I put the cajun seasoning in it, and I do love a bit of spice in my food. TheHub was my guinea pig and tried both without knowing which was which. He also preferred the coconut flour ones, but again I think the flavor profile with the cajun seasoning was a little tastier. The consistency of the almond flour was smoother but did not affect the taste or consistency of the cooked "fries"
I ate them with a little sugar free ketchup and was pretty darn pleased with them.
After I had them all cooked and blotted, I placed them  in a single layer on a parchment lined jelly roll pan and stuck them in the freezer. Once they froze I put them in a ziplock freezer bag. I think I should be able to pull out a few and heat them in the air fryer, but that is an experiment I have not tried yet. Hopefully I will sometime this week.
I also read in a comment on one of the Youtube videos that you could omit the flavoring and salt, then dust them with a sugar substitute like Swerve which has been mixed with a sprinkle of cinnamon for a ketofied churro. I might try it using the coconut flour, but that is for sometime in the future.
If you are counting carbs or doing keto, give it a try. You might like love it like I did!
*mashed potato flavoring
** Avocado oil is a neutral flavored oil. I think next time (if I remember to buy some) I might use a teaspoon or two of beef tallow. I think it would improve the flavor.  Now ask me if I have ever bought beef tallow before and the answer would be a big resounding no. I am not even sure where to find it. Amazon probably.
** *When rolling the dough out put the parchments on a large cutting board, roll it out and cut it on the board. That way you can carry the board to the stove top and put the dough directly into the oil instead of doing what I did. The first recipe I made I put the parchment directly on the countertop and transferred the strips to a plate before putting them in the hot oil. They are a little delicate and can break so move them as little as possible.
Posted by Anne in the kitchen at 6:43 AM