I have mentioned several times that I have been maintaining a keto way of eating for a while. The bad thing about staying on it is that the meals can get very boring. Another is that a lot of the recipes for ketofying foods results in a mouth full of disappointment. I do try new keto recipes often and about 8 out of 10 are tried once and never tried again. The best ones are usually for savory dishes that are eaten either as a main course, or served as a side dish (like the caulitato salad that I make frequently).

The worst recipes are usually the desserts. They tend to be a horrible rendition of what should be a thoroughly lovely end to the meal. This week, however, I had some success.

TheHub is not doing keto, and he eats bread, pasta and all sorts of things I am not eating, but he has almost given up eating sugars. This weekend he had said he really wanted something sweet and I had been toying with a recipe I found for keto  apple cider doughnuts. The only problem I had was the recipe called for apple flavoring and I had none. I did have some carrot cake* flavoring that came in a variety pack I bought the first time I ordered corn bread flavoring. It had been sitting unopened and I figured it would work just as well as the apple flavoring. 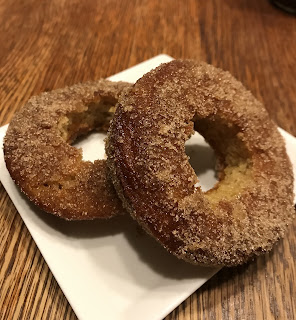 (Notice the holes.  I had to use the spatula to get these suckers out of the pan)
Almost Carrot Cake Doughnuts
Preheat oven to 350 degrees
Dry ingredients:
1 1/4 cup sifted almond flour
1/2 cup powdered swerve
1 teaspoon baking powder
1/2 teaspoon cinnamon
pinch of salt
pinch of nutmeg
Wet ingredients:
2 eggs
2 tablespoons unsweetened almond milk (I am sure you could use regular milk)
1/2 teaspoon carrot cake flavoring
2 tablespoons butter, melted
Mix all the dry ingredients together in a medium bowl. Mix all the wet ingredients in a small bowl, stirring well to combine it all. Pour the wet ingredients into the bowl containing the dry mixture and stir until it is all well combined.
Easy Peasy, right?
Now comes the only critical part to making these. I have non stick doughnut pans*, and even though I was warned the doughnuts would stick in them I thought how silly. The folks who made these must not have sprayed the pans well and relied solely on the non-stick surface. So I liberally sprayed each section well with Pam, poured my dough equally into the 6 doughnut molds and popped them into the oven. I took them out in about 15 minutes and let them cool as recommended. Then I turned the pan over onto a cutting board so they would have nice flat surface to fall onto when they released.
I lifted the pan and voila! Not a bloomin' thing had happened. The doughnuts were stuck and were not about to let go of the pan. I got my thinnest silicon spatula and ran it around the pan sides and the "hole" to loosen them, then repeated the action of turning the pan upside down on the cutting board. 2 of them released, kind of. They both tore a bit on the underside but still looked mostly like a doughnut.  Doughnuts 3-6 fared a little worse. Edible? Yes, but they had big gaps where parts of the doughnut remained in the pan.
Topping:
1/2 cup swerve granulated sweetener
2 teaspoons cinnamon
Mix in a flat bottomed bowl
When the doughnuts are completely cool to the touch, spray both sides with Pam then put into the bowl  to coat one side, flipping it over to coat the other side. Repeat until all the doughnuts are covered in "sugar"
The verdict? These were really good. TheHub snatched one before it was coated with the sweetener, and thought it was really good plain. He was wowed after he tried one with the topping on it. I liked them too and liked it even better the next day.
They were so easy to make I am going to start making them about once a week. Up next? Blueberry flavored doughnuts.
* I will not make them until the silicon doughnut pans I ordered from Amazon arrive. Evidently once they have cooled** in the pans you can just apply a little pressure to the bottom of each doughnut and they will pop right out of the pan.
**Almond flour based baked goods have to cool completely before you remove them from the pan or cookie sheet or they will completely crumble into a formless pile of crumbs.
p.s The carrot cake flavoring came from OOO Flavors.  I have no affiliation with anyone, so any product I mention here is something I have bought and had some success with. I am waiting for my purchase of apple flavoring  I ordered from Lor Ann Oils. I have never used this company for flavoring so the jury is still out.
Posted by Anne in the kitchen at 7:13 AM