Turkey, shaved or sliced (amount is strictly up to your personal tastes )
Keto cheese sauce
Tomato slices (one per sandwich)
Bacon (one per sandwich)
Toasted bread (one slice per open faced sandwich)
Keto cheese sauce
1 1/2 tablespoons butter
1/3 cup almond flour
1/3 cup cream
1 tablespoon water (more as needed)
1/3 cup grated Parmesan cheese
salt (to taste)
pepper (to taste)
1/8 teaspoon nutmeg
1/2 teaspoon paprika
Melt the butter in a small saucepan and add the almond flour stirring to make a roux. Slowly stir in the cream and the water and cook over a low heat until the mixture is as smooth as an almond flour sauce can be (not like a regular flour sauce). Add the seasonings and the grated cheese bits at a timer , stirring constantly, until it is melted and smooth. I added a little more water because I wanted a looser sauce, but you do you and make it like you want.
Meanwhile, warm the turkey (microwave is great for this) and put it on the toast. Follow with the cheese sauce, then the bacon slice, finishing with the tomato. 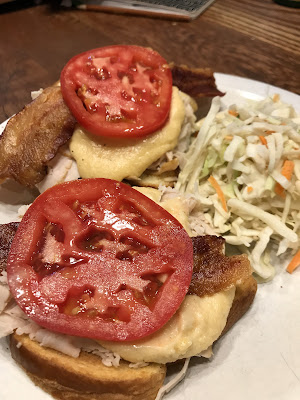 And that is it for a really tasty, easy dinner. TheHub had two open face sandwiches with a side of coleslaw. Because I am doing keto I had just turkey, no bread, with the sauce, bacon and tomato, and a huge serving of slaw. It was delicious even without the toast.
Posted by Anne in the kitchen at 9:32 AM