I have been doing keto and it is very easy to fall into a dinner time trap of eating the same two or three things. TheHub never complains about what we are eating as long as it is not repeats of the same foods over and over. Honestly it is easier to stick with keto if there are different flavors, so it works better for me to mix things up.
Add the soaring cost of meats (well groceries in general) and I am having to actively hunt recipes that will be keto compliant while limiting meat, fish and fowl. I managed to find this recipe at Sweet as Honey  which satisfied my needs for a "different" keto meal as well as being friendly with my quest for meatless meals. If you would like to see how she made hers, follow the link. I am posting mine with the slight adjustments I made to the recipe 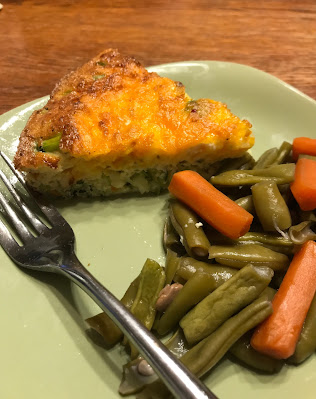 Crustless Zucchini Pie
2 cups grated zucchini*
1 cup grated sharp cheddar (reserve half)
1 cup grated pepper jack cheese (reserve half)
7 large eggs,
1/3 cup heavy cream
2 tablespoons almond milk
1 teaspoon hot sauce (I use Frank's)
1/2 teaspoon garlic powder
1/4 teaspoon salt (I have mentioned before I don't like a lot of salt. You do you)
about 3 shakes of ground pepper
3 scallions, thinly sliced (chives would have been better but I had none)
1 shake dried red chili peppers
2 tablespoons coconut flour
Heat oven to 400 or 375 for a convection oven
*Grate the zucchini. I used a box grater and grated it directly on a clean dish towel. Gather up all the corners forcing the zucchini to the center of the towel, then press the zucchini into a tight ball. Begin squeezing it until you can't squeeze out any more liquid. (I should have held it over a pot rather than the sink during the squeezing process  to catch the liquid to freeze and use in a soup or broth during the fall. Yeah, I didn't do that.
Spray a deep dish pie pan with cooking spray or coat it well with coconut oil. Put the zucchini in the bottom of the pan . Use a fork if you wish. I wash my hands a million times while I cook so I used the tools The Maker gave me and just pressed it into an even layer covering the bottom of the pan. Next sprinkle half of each type of cheese over the zucchini.
In a medium size bowl beat all the eggs together, adding the cream, milk. hot sauce, garlic powder, salt, pepper, and scallions. Mix it well before adding the coconut flour, because coconut flour absorbs liquids so you want to be blending it in as late as possible. Stir in the coconut flour, mix quickly (and well ) then pour it over the zucchini. Sprinkle the remaining cheeses over the top of the pie and bake about 35 minutes or until the center is completely set.
I suggest letting it cool for a few minutes before serving it so the slices will hold together better when they are cut
The verdict:
I intentionally cut the number of eggs from 8 to 7. I am not a huge egg fan and knew this would taste eggy, which is why I added the hot sauce and chilies. I needed something to cover some of the egg flavor. It still had some but it was not overwhelming. I served it with green beans cooked with carrots and that was it for our meal.
This was not really a pie as much as it was a frittata. It was a very tasty one at that, with a lot of leftovers. We each had a slice and there are 6 slices remaining. I am going to keep a couple of them in the fridge for lunches this week, but am freezing the rest for a later meal.
I will make this again but I will make some changes. I think caramelized onions layered on top of the zucchini would be fabulous, as well as some sprinkled minced jalapeños. I will leave out the cheddar totally and just use pepper jack cheese. I will also add a little chili powder and powdered coriander to the egg mix before pouring it over the zucchini.
Try it, you might really like it!
Posted by Anne in the kitchen at 6:59 PM