In nearly every post I have made about food during this isolation period I have mentioned that I am trying to use every single little bit of food. In addition to not wasting it I am also changing the way that I cook a little bit. For example, if I am using onion for flavoring, I use about half of what I used previously. Even though there is still a lot of food available for purchase, I am trying to go to the store a minimal number of times so I am stretching my supplies here. The same goes for any other veggie I use for flavoring. 1/2 the amount of green pepper does not change the taste of a dish tremendously, unless it is something like philly cheesesteak which relies on the peppers and onions to create the dish. Having said all of this, I have little containers of partially used veggies in the fridge.
That along with something Son3 said inspired this dish.

Son3 lives in Manhattan at the epicenter of the most cases of the virus. It makes sense since it has a dense population in a very contained space. He and DIL3 made the choice right at the beginning to stock up on whatever they could find to be prepared for a longer than expected isolation. And we all know that square footage in an NYC apartment is minimal, so while they were stocking up they had limited space to keep things. One food they found easily during the two days they were hunting and gathering were hotdogs. No one's favorite food, but like he said, they freeze easily and take up little space. The only issue with them is other than eating a hotdog, or beans and franks, or kraut and weiners what do you make with them?

I started giving this a little thought and came up with a trial recipe to send to Son3. I made TheHub be my guinea pig for the real version and I made mine a keto version of the same thing. This is the result with what should be some acceptable substitutions based on what is available.

This recipe is based on a single serving, which can be easily doubled, tripled or whatever you need to do to it. 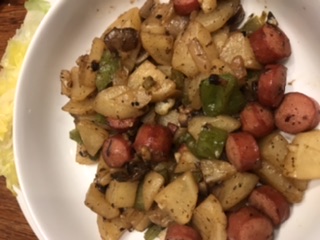 (For reference, the bowl in the photo measures 7 1/2 inches in diameter)

1 or 2 hotdogs cut into "coins"
1 medium potato, chopped ( peeled or unpeeled, your choice but use the one that looks like it is about to sprout first)
2 tablespoons chopped onion
1/4 small bell pepper chopped
1 rib celery chopped (very wilted celery that needed to be used)
4 mushrooms, sliced (added because I had them and needed to use them)
2 tablespoons oil (I used olive oil, but any oil, bacon grease, lard, chicken fat will do)
garlic powder (a couple of pinches)
onion powder ( a pinch)
chili powder one sprinkle (but optional)
cumin (another pinch but also optional)
1/4 cup water

Put about 1 teaspoon of the oil in the bottom of a small sauté pan and cook the hotdogs until they are a tiny bit crispy. Move them to a plate, but do not drain the pan. Add the remaining oil to the pan then add the onions and the pepper bits and cook until they are wilted. Next toss in the celery and the potatoes. I used a silicon spatula to turn the mixture and continually scrape the bottom of the pan because you don't want the potatoes to stick. (I was cooking in stainless steel and did not have a non-stick surface, so stirring continually was necessary). Once the potatoes begin to soften a little add the water and seasonings. You will still need to keep the vegetables moving, but it works better to kind of flip them rather than stir since you do not want the potatoes to break apart.  As soon as the potatoes soften add the hotdogs back into the pan. When everything is piping hot place in a bowl and eat. I suggest serving it with a little tobasco or whole grain mustard.
For the keto version I substituted cauliflower for the potatoes, but followed the same cooking instructions.

You could also use about a cup of thawed tater tots, thawed frozen French fries cut into cubes or a can of new potatoes in lieu of a raw potato. It would be perfectly good with a sweet potato, chopped radishes or some rutabaga (I don't like rutabaga or turnips but they would both work if you like the flavor) instead of the potato. Canned navy or garbanzo beans would also be an alternative to the potatoes. I had mine with chopped cauliflower and it was very tasty, and even chopped cabbage would work. Of course you can go all out and add all or any combination of these to make it your own. The cooking time would alter slightly but it would work.

Have no bell pepper? Add a couple of shakes of red pepper flakes. If you like heat use a jalapeño pepper instead. Or omit the pepper all together.

Have some wilting carrots, leftover bits of green beans or peas? Toss them in the pan , You could also add greens that need to be used.

And the verdict: Believe it or not, this was a really tasty dinner.  For our meal I used a total of 3 hotdogs and gave TheHub more than half of the "coins'. I did not personally try the one with the potatoes, but even my keto version was good. TheHub thought his  was really tasty and filling. And honestly it looked much better than mine. I guess that is just the difference in using a starchy (delicious) vegetable instead of a cruciferous one.

So go out on a limb and experiment a little. The object here is to use what is available in your kitchen making the most of your resources. Add or change ingredients based on what you have to work with. Just eat, stay at home and stay out of the stores as much as possible to flatten this curve. And if you are considered an essential worker, please be safe and take care of yourself!