A week or so ago we had an abnormally cool day and night and I decided to forget about grilling as planned and make something inside. Unfortunately I had nothing thawed, except a package of sausage and a leftover chicken breast.
For some reason, and I am not exactly sure where it came from, I decided to make jiffy Jambayla. It was unusual for a couple of reasons. I rarely make it ,and when I do I cook is long and slow. Desperate times and all that, huh?
So not only was I going to cook it fast, I had to make it keto using just what I had on hand. I knew I had onions, peppers, and celery on hand which is the beginning of anything Cajun. I had no shrimp, crawfish or crab, but knew I could easily make it without it. No green onions, fresh parsley or cilantro to top it? Details!
So what I finally came up with as a bastardized version of Jambayla, not as delicious as normal, but still a tasty very low carb dish that actually tasted pretty close to the real deal. 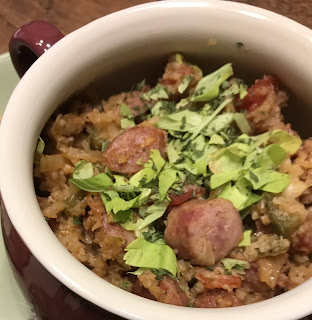 Faux Jambayla
1 green bell pepper cut into strips
1 red pepper cut into strips
1 small onion julienne cut
3 ribs celery chopped
2 tablespoons olive oil
1/2 pound smoked sausage  cut into "coins"(would have used Andouille but I didn't have any)
2 cloves garlic, minced
1/4 cup broth (I used chicken because it was already opened and in the fridge)
1 cooked chicken breast cut in pieces
1 can diced tomatoes
1-2  tablespoon cajun seasonings (I used Tony Catchere's, the amount is your personal preference)
cauliflower rice, or regular rice
Heat oil in a sauté pan then add the onion. Cook until it is slightly soft before adding the celery and the peppers. Next toss in the smoked sausage, stir and cook through. Quickly add the minced garlic and stir it around for about 30-45 seconds. The trick is to get it wilted without burning it. Then toss in the broth and continue stirring while adding the rest of the ingredients, except for the rice. Stir well and let it cook for a few minutes until everything is nice and bubbling.  Because TheHub does not do keto I split this the two of us and just put his on top of hot cooked rice, then I stirred my cauliflower rice into the pan. (because the caulirice was straight from the freezer)
I like something fresh on top of it, but as I mentioned earlier I had no green onions, parsley or cilantro. Instead I chopped some of the celery leaves and sprinkled it on top of mine. Taste 10, looks 3! When I do it again, I will have a combo of celery leaves and green onions to sprinkle over it.
This was pretty darn tasty and is something I will do again (with the addition of shrimp and a bay leaf ) Plus it is very easy to make to accommodate the two different ways of eating. It would have tasted better and more authentic with the addition of seafood but that is life isn't it?
If you like Jambayla and would like to make a small batch quickly, this might work for you, like it did for us.
Posted by Anne in the kitchen at 11:39 AM