"The Okra Song" by Hot Tamale. Who even knew there was such an animal!
Before I even begin this post let me vent about how much I dislike this new Blogger format. I have no idea why anyone would "fix" something in a less user friendly way. Though I had rather not do it I am seriously considering changing to word press. It should not be this difficult to post a picture where you want it. For the record, blogger won and I never did figure out how to have it on the left or right with the text on the other side. Enough venting!
Thursday afternoon when I was cleaning out the fridge I found the okra I had needed to be cooked right away, so it sort of sealed the deal on what the meal would be. I was also ready to eat some, and since I can't have cornmeal, I tried a ketoized version.
When you read the recipe you will notice it calls for a mess of okra. I am just guessing but I had maybe 1/2 pound. Shoot me! I am from the south and we don't measure or weigh produce. You go out to the garden and cut whatever is ready. Then you bring it in and stick it in the fridge, repeat for several days and then you have enough for a meal. A mess is enough to cook for your family (in my case 2 people so it would be a small mess.) If I had known ahead of time I was going to post this recipe I would have counted the dang things. 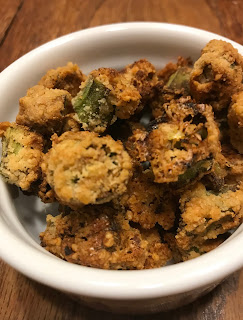 Keto Okra.
A mess of okra, cross cut into slices bout 1/2 inch thick.
2 tablespoons almond flour
1/2 cup parmesan cheese
salt if needed. I don't like salt and thought the parmesan was salty enough
Cut the okra and let it sit in a bowl for about 30 minutes. I stirred mine a couple of times. Normally I think the slime okra produces is horrendous but you need it for this recipe. After the okra is ready (notice how I did not use the term slimy again) mix the almond flour and parmesan cheese together, then pour it over the okra and (use your nice clean hands) toss to make sure all the pieces are covered.
Set the air fryer to 380 and preheat it for four minutes.  Remove the basket and spray the insert tray with pam.  Put the okra in a single layer, then spritz with pam. Stick that puppy back in, and cook for about 14 minutes. Take it out and enjoy all its crunchy goodness!
It was surprisingly good. I had very low expectations, but even TheHub liked it. Crap that I found out how to make it right at the end of okra season. If not for bad timing I would have no timing at all. It's all good I guess, since I will probably still be on keto next summer.
Give this a try. It is worth it!

Oh, this would also work on a baking sheet in a standard oven set to 375. Just be sure to spray the sheet with pam first and then spray the okra. Check after 14 minutes and if it is not crunchy continue baking a little longer.

Posted by Anne in the kitchen at 4:38 AM