Ordinary Times Call For An Adjustment

Week 29 of 2021 was neither joyful nor joyless. It was just an average week, filled with mostly average days. I imagine the excessive rain had something to do with the lack of excitement. I know it seriously impacted my swim time and that seriously impacted my mood! So here is to some sunshine, swim time, and an attitude adjustment. Fingers crossed!
Friday:The day was pretty uneventful but we had plans to go out to eat, which fell apart  at the last minute. I think the biggest joy was actually getting dressed to go out, even if it did not happen. I probably should pay more attention to my hair, makeup and clothes everyday, but I only go to the grocery store, Mom's house or stay here at home and none of those places care what I look like.

Saturday: We made our usual trek to the produce market. Even though it is not keto, sometimes you just have to cave to delicious watermelon and an ear of corn. Mouth dribbling joy!

Sunday: I slept late, well at least very late for me and did not wake until almost 9. TheHub and I had a mostly lazy day, though we did go out riding around for a bit, and we got to talk with a couple of the sons.

Monday: This does not sound joyful and was not while I was doing it, but I got the stairs at Mom's house sanded and stained. Talk about a huge difference. The joys are it looks so much nicer, and it is done!
Later that afternoon and through the night we had horrendous rains and flooding. I am thrilled that we had no flooding at my house.
And the last joy was TheHub's dinner meeting left me to my own devices at dinner. Translation: No cooking!
Tuesday: There was a special joy that the waters which were so high in Mom's back yard receded leaving little debris in its wake. And the second, though somewhat selfish joy, was TheHub's second dinner meeting this week which meant I did not have to cook again!
Wednesday: I spent all week waiting for various people to show up at Mom's to do a little bit of last minute work. I waited all day Wednesday for the guy we hired to do some work in Mom's back yard to call me so I could see it and pay him. It was a no show, no communication type of day. My beloved sister was the contact point and I did not have his phone number, but she had texted him my number because she had several appointments and would be unavailable. So I basically wasted my day hanging around waiting  on his call. While I was waiting for him I did at least have a really nice phone visit with my cousin who lives in San Antonio.
Thursday: The yard guy finally showed up and did a really nice job, then it was wait for the electrician. I knew he was not coming until later in the afternoon but he has great communication skills, and a little heads up is all I really ask for. He did not finish until well after 7, but he did change over the old fuse box to a breaker box. And that was the last major hurdle.
I hope you find your joy this week. I hope I find/create more joy this week. It is always there even on regular mundane weeks!
And these are the pics of Mom's post reno. All we really did was trim the bushes and shrubs and change the paint colors. 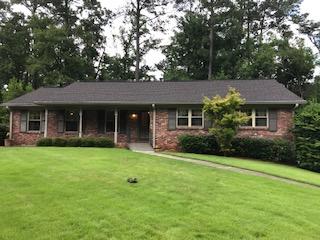 If you look in the center of the lawn you will see my flip flops. Mom's grass is so thick, it eats my shoes, so I usually take them off before stepping in it.  I forgot yesterday and just left them where they came off. 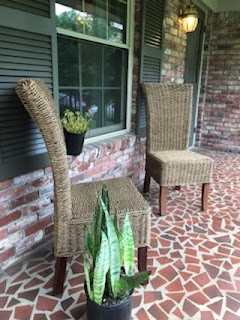 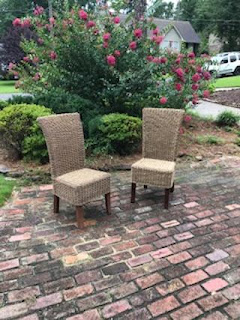 Patio in the front yard 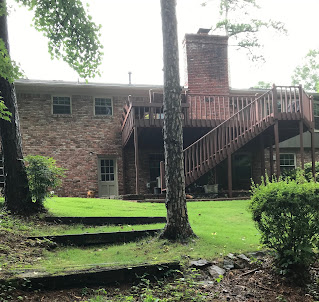 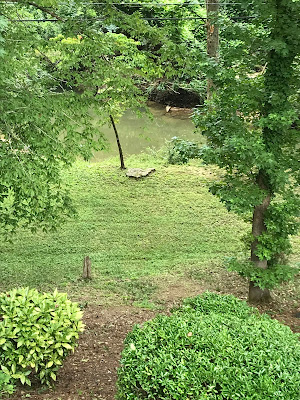 Creekside
Posted by Anne in the kitchen at 1:37 PM