It is now zucchini time at the old homestead. Ok, we really don't have a homestead. Instead we have a house in the suburbs with a small garden. But a small suburban garden can produce massive amounts of zucchini, which is coming in by leaps and bounds right now. I am having to find some different ways of using the stuff, while remaining true to keto. Thank goodness you can Google "keto recipes using zucchini", and more ideas than you can imagine pop up.

I found this one here: 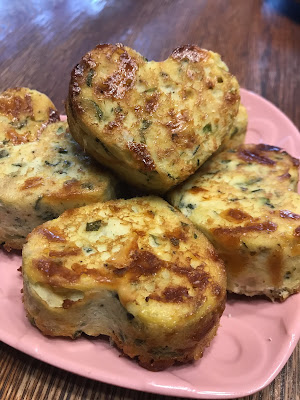 2 packed cups grated zucchini
1/2 cup butter, melted
1/4 teaspoon salt
1/4 teaspoon pepper
6 eggs
2 tablespoons basil finely chopped
1 teaspoon baking powder
3/4 cup coconut flour
1 cup grated cheddar cheese (I used half cheddar and half Monterey Jack )
Preheat oven to 350.
In a mixing bowl, add the zucchini, butter, salt and pepper and mix well.
Add the eggs, basil and baking powder and mix well.
Add the coconut flour and mix until the batter becomes thick.
Stir in the  cheese.
Spray a silicon muffin pan* with pam, or use silicon baking cups to line a regular muffin tin.  Fill the cups to the top, smooth, and pop them in the oven.
Bake for about 25 minutes, until the muffin tops are golden.
Allow to cool for about 15 minutes before removing them from the pan. Items baked with coconut or almond flours tend to crumble if they are removed too quickly.
I followed the recipe as given, with the two exceptions. I used basil instead of oregano because when I went outside to pick the fresh herb I forgot which one I was supposed to use. I like basil better so I just went with that. Good mistake on my part!
Since it called for 6 eggs and it was the first time I had made this, I wanted to see if I liked it before committing to using so many eggs. I am not a big egg fan and was pretty sure the muffins would taste eggy. I halved the recipe for the trial.
Boy was I wrong. The consistency is not like a real muffin. It actually falls somewhere between a muffin and a baked omelet. (or at least what I think an omelet would be like if it were baked) The taste is outstanding. I am so glad I had not read the recipe thoroughly because the basil flavor was delicious.
These would be great for a grab and go breakfast, or delicious served as "bread" with a salad. I will be making these again and experimenting with some different flavors.
*I was making fewer than the original recipe and I only had one 6 muffin silicon baking pan. Yep, it is heart shaped, used to bake heart shaped brownies for Valentines Day one year. I figured it would work just fine and I was right. (I am correct so seldom that I will take small victories like this as a major win.)
If you are looking for a low carb option for using zucchini, or if you just want to try something tasty and different this might be a recipe you would like.

Posted by Anne in the kitchen at 8:53 AM