The Great Zucchini Race is On

As some of you may know, I love music, and am a threat to create lyrics for existing songs* as I go about my day.
For example, when we were teens My Beloved Sister and I would sing different words to the old Fiddler on the Roof song "Tradition".
Relentless, relentless, Rentless!
Relentless, relentless, relentless!
Who has to right to scrutinize her daughters
Make them both feel guilty,
Tell them they are wrong.
And who has the right as the mother of the house
To have the final say alone!
The Momma! The Momma!
I still create new lyrics to songs and hum the tunes, especially if I am angry with TheHub. He may think I am just humming the Armour Hotdog tune, but in reality my mind is singing (at the top of my lungs) some very rude lyrics about what type of jerk I might think he is at that particular moment.
The other day after harvesting some regular zucchini, and one exceedingly big one, I started singing out loud (to the tune of What Do You Do With a Drunken Sailor)

"What do you do with a huge zucchini (repeat 2 times) Throw it at your neighbor"
That would be a sad thing to do because I really do like my neighbors, plus the full on onslaught of zucchini has not started yet, so it is much to early for zucchini flinging!
Since the rules of gardening declare I cannot let anything go to waste, and this one had gotten too big to be a delicious tender sautéed dish I grated it. Then I remembered a recipe I copied into an old handwritten cookbook I had when the kids were little and I found all new recipes in magazines. It must have been about sneaking vegetables into foods kids love because I had copied pages of veggie laden "treat" recipes. I did change it to make it keto but, other than the flours and the sugar substitute, it was the same recipe I had way before we had a home computer.
Zucchini Brownies 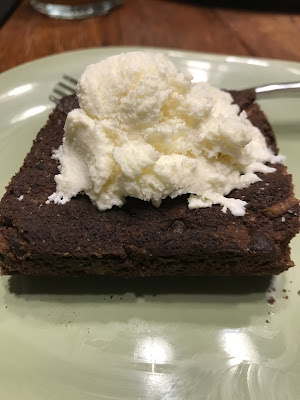 1 cup grated zucchini, squeeze all the liquid out
3/4 cup almond flour (the original called for 1 cup flour)
1/4 cup coconut flour (I might have done better with  3 tablespoons of coconut flour but the 1/4 cup worked ok)
3/4 teaspoon baking soda
1/4 teaspoon salt
1/4 cup cocoa
1 egg, beaten
1/2 cup sugar substitute that has 1to1 measuring ratio with sugar  (I used monk fruit, or use sugar if you are not doing keto)
1/4 cup butter, melted
1 teaspoon vanilla
1/4 cup chocolate chips (I used Lily's sugar free)
Preheat oven to 350 degrees. Squeeze as much liquid out of the zucchini as possible. I stuck mine in a large sieve and pressed with the back of a spoon until it was almost dry. Set it aside
Mix the flours. soda, salt and cocoa in a small bowl
In a medium bowl add the egg, sugar substitute. melted butter and vanilla and blend very well. Use a mixer if you'd like but I prefer to just stir with a wooden spoon. Add in the flours and stir, stir and stir some more. When using the nut fours you don't have to worry as much about over beating because there is no gluten  to worry about. This stuff will be thick. Coconut flour tends to absorb a lot of moisture, so stir in the nearly dry zucchini and mix it well. The residual liquid will soften the batter some. Add the chocolate chips and stir to distribute.
Grease an oven proof 8x8 pan (what am I talking about? I spray mine with Pam because it is easier, but you do your way) and spread the batter evenly into the pan. (An offset spatula really does help with this step)
Bake for about 25 minutes, remove from the oven and let it cool. This is kind of a critical step when using almond flour. If you try to cut it and take it out of the pan while it is warm it tends to crumble.
I served this with a small bit of Rebel vanilla "ice cream" which is an uber low carb product. Son2, Dil2 and TheHub all had it, and none of them are ketonians. Son2 had a second serving, which is the litmus test of how well received it was.
I thought it was really good, but did not particularly like it a couple of days later. Next time I will halve the recipe and make just enough for one meal's dessert.
It was good, had a nice consistency for a keto dish, and passed the guests test. All in all, I would say it was a winner and I will do it again this zucchini season.
*I blame Mad Magazine and my neighbor Bobby C. for this lyric habit of mine. When we were kids our parents played canasta with his parents sometimes and we were too young to leave at home, so we would go with them to the house and sit quietly and amuse ourselves. Bobby had a huge collection of Mad Magazines and I was a reader, so the entire time the adults played cards, Bobby would build model cars and My Beloved Sister and I would read.  I do not know if it was the brilliance of the satire in the magazines or inhaling  the airplane glue fumes, but one of the magazines had some altered words to songs I knew. For some stupid reason, to this day I still remember Mad's altered words to "Hello Dolly" AKA "Hello Deli" and "Moon River "AKA "Chopped Liver"
And I have not been right in the head since then!  (Ok maybe Mad and airplane glue is not totally to blame for my skewed outlook on life, but that's my story and I'm sticking to it.)
Posted by Anne in the kitchen at 9:22 AM